Bread dough after rising overnight. It's so beautiful! 😍

About to put it in the oven, let's see how it turns out!

What the hell DeepL? This is Firefox.

There's an awesome bake sale in our school today, all proceeds go to help immigrants coming to our city.

Contributed my gingerbread cookies (photo attached), and spent some money on others' cookies, muffins and cakes as well.

Took longer to bake than expected, but it's out of the oven... Now just I have to wait for it to cool…

I didn't expect it to rise so nicely :D

Having fun smacking each other in the face in #Samerion.

I never go on #Twitter (I had an account for a while I never used) and I do only when someone links me a Twitter thread.

But tell me, how can anyone use it when it looks like this? Is it seriously so full with crypto??

Baking gingerbread cookies again! Made quite a lot of them, they're vegan. My sister decorated the previous non-vegan batch in the meantime.

No image description, because I'm heading to sleep rn, just wanted to post this quick. It's all cookies!

#Firefox kept crashing for me so I finally updated it. Hesitated to do this for a long time, because the new theme is so bad. Works for some system skins, but definitely not for dark+light ones like Ant. The focused tab looks so out of place…

Computer is in trouble.

#Sbubby relevant to above tags lmao

Ain't as hard as it looks, just takes a knife.

Favorite albums of the week #3:

Murder Of The Universe and Fishing from Fishies by King Gizzard And The Lizard Wizard.

A long band name, huh? They're an awesome indie rock band that has gotten a bit popular in the last couple years and their style varies a lot from album to album.

Murder Of The Universe is a collection of three stories from the "Gizzverse", about the Altered Beast, the Lord of Lighting and the Balrog, ending with an epic story of Han-Tyomi, the cyborg who kills the universe.

Fishing For Fishies is an album, among others, about the climate change and other disasters humans have caused to the nature, with very catchy songs that are very pleasant to listen and even dance to. Fuck all of that plastic! 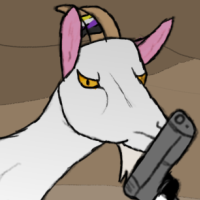