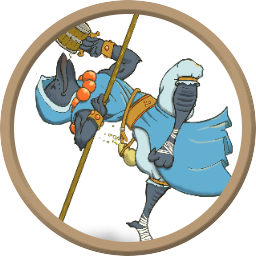 Let's talk about gay DnD characters! When I was in the closet, I had a lot. And unfortunately, that kinda made them in the closet too.

My #2 favorite is Edumundo! (the exclamation point is part of his name). Flamboyant, giant hat, and a wit as deadly as his blade. He's my #2 because in an adventure, he swung across a ships rigging, slashed a guard and then... kissed the captain. After an awkward pause, my DM (and now best friend) said "It succeeds. I'm not going to make you roll for that."

This was like 10 years ago, and I still remember it vividly. Since then, my group and it's stories have become much more inclusive and creative. #DnD